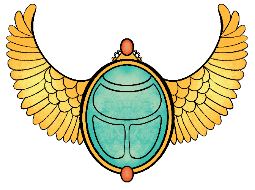 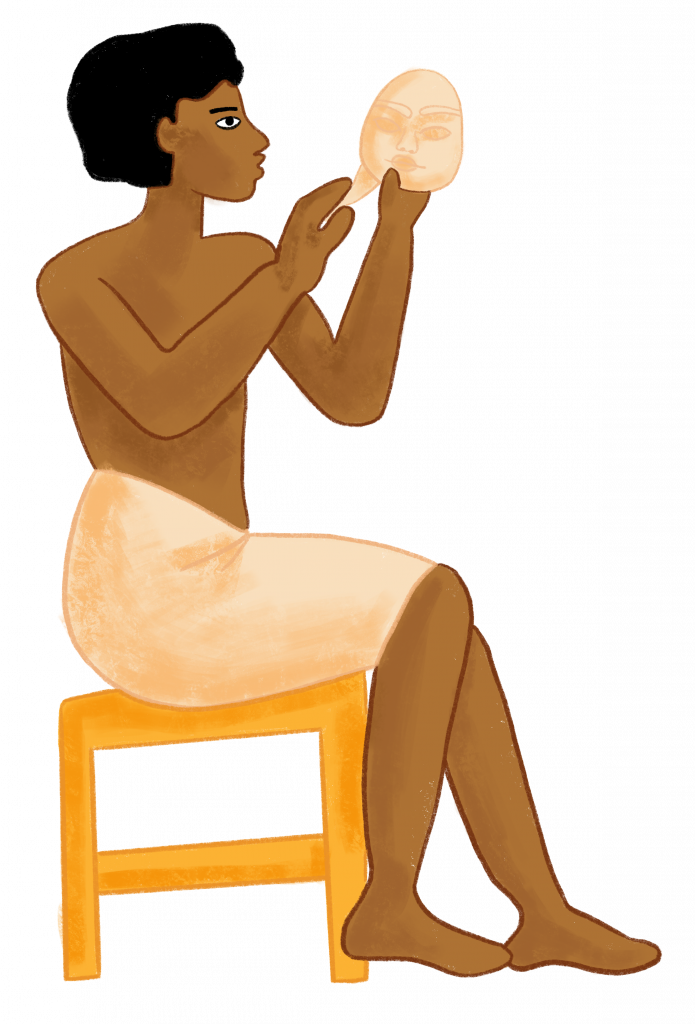 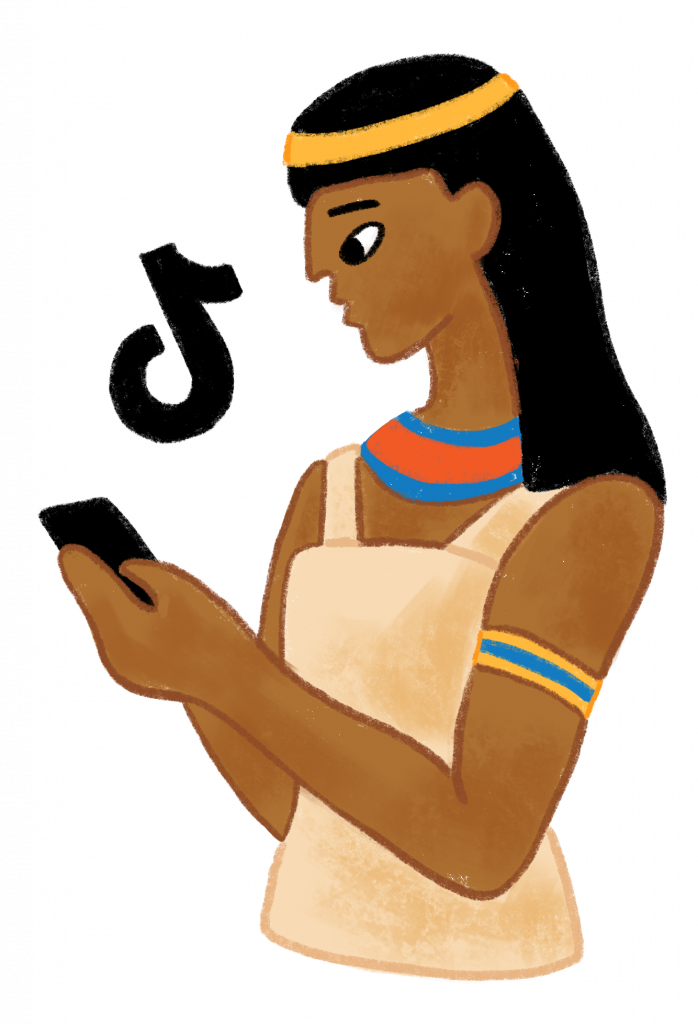 Part 1: Multiple Choice — Instructors are encouraged to utilize the questions below alongside interactive assessment platforms such as Kahoot, Blackboard Learn, Quizizz, Quizlet, and Schoology.

1. King Tut’s father named him after which Egyptian god?

2. What is the most probable reason King Tut’s tomb was not completely looted?

a. It had the most artefacts
b. He was unknown
c. It was small and relatively hidden
d. Its contents were not considered valuable

3. Which of the following activities did pharaohs enjoy in their leisure time?

a. Hunting
b. Walking around the palace grounds
c. Horseback riding
d. All of the above

4. How many heirs (or children that could survive to take the throne) did King Tut leave behind after his death?

5. King Tut married Ankhesenamun, who was also his:

6. King Tut ruled Egypt on his own and without any help.

7. Which of the following was NOT traditionally part of a pharaoh’s daily routine? 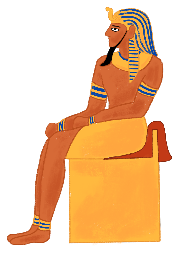 • Students will understand the influential role King Tut’s life had on the ancient world.
• Students will create a voice-over narration in the form of papier mache beards.
• Students will present their sculptures to the class and explain their use of color and contrast in accordance with beards worn by men and women in ancient Egypt.

1. Begin by downloading the Tik-Tok app (if you don’t already have it)
2. Create an account for you and your groups’ videos
3. Exchange your groups’ handle with other groups in order to see each other’s creations!
4. Part one of this exercise is to visit King Tut’s immersive exhibit and film all these fashion staples: Nemes, Kalas and Shenti.
5. Part two: In assigned groups of 3-4 make a tik-tok video reenacting a moment in King Tut’s life (i.e when he was assigned to the throne)
6. Post it on Tik-Tok with the hashtag #actoutkingtut and #kingtutimmersive
7. Finally, watch your classmate’s videos and let them know what you think!

• To prepare for the Kahoot! game, visit this link and select “Play as guest” or sign in to an existing account. Select team mode and teams on shared devices.
• Split the classroom into even groups of 3-5 students and let them choose their team names. Have one student from each team volunteer to use their phones for the Kahoot! game. Project the Kahoot! page on your board to share the Game Pin and the rest of the game.
• Have each team go to Kahoot.it on their chosen phone and enter in the Game Pin, their team names, and their individual names. Once everyone has joined the game, you can begin with the questions! Follow along with the prompts on your screen until the end of the game.

On slips of paper write down different scenarios. Form groups on 3-4 and pick one slip. Use the following scenarios as a prompt to improvise, based on what you’ve learned about King Tut and the ancient Egyptian civilization. Let each group have no more than 10 minutes for preparation. Participants can also get creative and make their own props in the given time. Remember that you will get extra points for creativity!

• Slips of paper
• Pencil/Pen
• Your Creativity
• Any object around you! 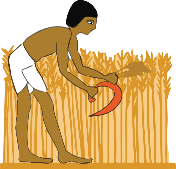 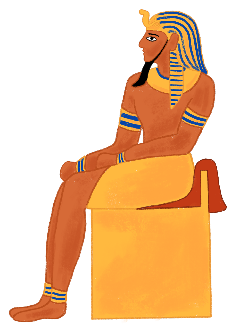 Scenario 1: Enact the process to mummify King Tut after his demise.

Scenario 2: How would the process of the Barter system in ancient Egypt bring about wealth?

Scenario 3: How would the poor farmer fall into slavery?

Scenario 4: Is there a way for the enslaved to come out of slavery? The lawyers must use different methods.

After completing this activity, students will: 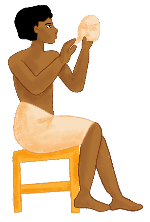 1. Begin by tracing out a shape for the outer part of the mask on cardboard with your pencil
2. Duct tape the plastic costume mask to the centre of the cardboard. This will go on to form the face
3. Mix together 1 cup of glue with 3/4 water. Dip your newspaper strips in the mixture and lay them on the mask. Make sure to cover the entire surface
4. Once the strips are dry, you can either put on another layer or begin to decorate with acrylic paint and brushes. Don’t forget touches like the kohl eyeliner and horizontal blue stripes
5. After the paint has dried, your mask is complete!

• Consider the colours used on the original mask and research their significance in ancient Egyptian culture. What did blue represent? Who was allowed to wear gold in Egyptian society? How were the pigments created?
• Why do you think King Tut’s mask is so iconic? What does it tell us about the importance of its discovery?

• How else can students decorate their masks? Encourage them to be creative! (For instance, they could con- sider using a toilet paper cardboard roll to construct King Tut’s fake beard.)
• Give students the choice of making masks in the image of different ancient Egyptian gods. Afterwards, have them write a short report on their god and the significance they had on the culture and society of ancient Egypt. Don’t forget to let them share their findings with the class!

1. Start off by downloading Instagram, assuming you don’t already have it
2. Create a group chat with your class
3. Within the browse filters, search for King Tut or Egypt
4. Choose one of the filters and take your #selfiewithkingtut (there is a filter made by Immersive King Tut called “King Tut Portal”)
5. Within your class’ group chat, submit your photo and short write-up
6. Once all assignments have been submitted, feel free to check out your peers’ work and let them know how they look as King Tut or someone from ancient Egypt!

A Day in the Life Comic Strip

• Students will create a one page comic strip based on a day in the life of an ancient Egyptian
• Students can choose from any type of citizen from any social class (i.e. a farmer, a worker in the king’s palace, a noble)
• The comic strip will include pictures, dialogue, and captions
• The comic strip should have at least 9 boxes
• Encourage students to use at least three sources

• Split the class into groups of 3 or 4 • Based on a topic from ancient Egypt, each group will write a skit using relevant characters and present it
• Each skit should be 3-5 minutes
• Each group member will wear name tags to display the name of their character
• Encourage students to create costumes based on their knowledge of ancient Egyptian clothing

Ay: King Tut’s vizier who succeeded him as pharaoh after the former’s death.

Bilharziasis: A disease caused by parasitic worms known as schistosomes which are often carried by freshwater snails. These parasites are still commonly detected in Egypt today. They can cause inflammation in the bladder, intestines and liver.

Crooks and flails: Ttwo objects resembling a hook and a tassel. In ancient Egypt, they were symbols of the pharaoh, and were often depicted in the hands of figures featured on sarcophagi (such as King Tut’s).

Cyperus: A plant also known as “papyrus” which grows throughout the African continent and was widely used to make slates of “paper” for the ancient Egyptians to write on, starting in around 2900 BCE.

The Ebers Papyrus: A large scroll of Medical texts dated back to 1550 BCE and is one of the oldest medical works. The papyrus contains 700 magical formulas and folk remedies meant to cure afflictions ranging from crocodile bite to toenail pain.

The Edwin Smith Papyrus: An ancient Egyptian medical text, named after Edwin Smith who purchased the scroll in 1862. It is the oldest known surgical text on trauma that has survived today.

Eighteenth Dynasty of Egypt: Classified as the first dynasty of the New Kingdom of Egypt and the era in which ancient Egypt gained the most power in its history (spanning 1550-1549 to 1292 BCE).

Eye of Re: The eye is an extension of Ra’s power (ancient god of the sun), and is equated with the disk of the sun, but it often behaves as an independent goddess.

Harem: During the Old and Middle Kingdoms the term ipet nesut was used to describe a female-based royal institution. This term is translated today to ‘Harem of the King’.

Horemheb: The army’s commander in chief during the reigns of King Tut and Ay. He was the pharaoh of ancient Egypt after Ay.

Kohl: Aa black powder applied like eyeliner around the eyes.

Narmer Palette: Dating from the reign of King Narmer (c. 3000 BCE) is a large shield-shaped slate ceremonial palette (Cairo, Egyp. Mus.) from Hierakonpolis, which is decorated with reliefs including two figures of the King wearing the white crown of Upper Egypt (recto) and the red crown of Lower Egypt (verso). | From Oxford Art Online – Grove Art Online for “Egypt, ancient”

Nefertiti: Nefertiti was a queen and wife of Pharaoh Akhenaten (King Tutankhamen’s father) in the 18th Dynasty of ancient Egypt. Nefertiti and her husband were known for a religious revolution, in which they worshiped the sun god: Aten, as the only god.

New Kingdom: The New Kingdom encompasses five hundred years of Egyptian history (c.1550–1070 BCE) characterized by long stretches of domestic stability and foreign expansion. Lengthy reigns of kings such as Thutmose III, Amenhotep III, and Ramesses II abound in textual, architectural, and artistic milestones; the reign of Akhenaten and his immediate successors, the Amarna Period, illuminate the potential for both religious and political transformations in a civilization often described as monolithic and unchanging. Extensive textual and archaeological material from throughout the Nile Valley make the three dynasties of the New Kingdom among the best understood of the pharaonic era. | From The Oxford Handbook of Egyptology, chapter 31 “The New Kingdom”

Peseshet: Peseshet lived under the Fourth Dynasty in ancient Egypt, 2500 BCE and is often credited with being the earliest known female physician in history. Facts about her life were rediscovered in Akhethetep’s tomb (her son) in 1898.

Rhind Mathematical Papyrus: Was a A leather roll consisting of 21 arithmetic and 20 algebraic problems and dates back to 1550 BCE, Thebes. In 1858, it was purchased by Henry Rhind and currently belongs to the British Museum.

Sais: An ancient Egyptian city in the Western Nile Delta on the Canopic branch of the Nile.

Shabti slave: A shabti slave was an individual who sold themselves into slavery in ancient Egypt in exchange for the promise of an elevated status in the Egyptian Afterlife. | From Journal of the Economic and Social History of the Orient, Vol. 52, No. 4/5 (2009)

Sobekneferu: Sobekneferu was the first female pharaoh of ancient Egypt and the last ruler of the Twelfth Dynasty of the Middle Kingdom. She ascended to the throne following the death of Amenemhat IV and remained queen for 3 years.

Thebes: The capital of Egypt during the New Kingdom. For a time, it was also the capital of worship for the god Amun.

Valley of the Kings: The royal necropolis of New Kingdom Egypt, known as the Valley of the Kings (KV), is one of the most important—and celebrated—archaeological sites in the world. Located on the west bank of the Nile river, about three miles west of modern Luxor, the valley is home to more than sixty tombs, all dating to the second millennium BCE. The most famous of these is the tomb of Tutankhamun, first discovered by Howard Carter in 1922. Other famous pharaohs interred here include Hatshepsut, the only queen found in the valley, and Ramesses II, ancient Egypt’s greatest ruler. | From The Oxford Handbook of the Valley of the Kings

Vizier: The highest ranking official below the pharaoh in the Old, Middle, and New Kingdoms. 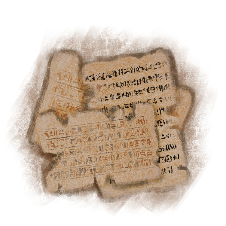 back to section ic